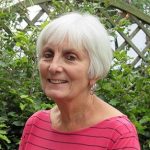 Joined Hoveton Parish Council: December 2016
Occupation: Retired MP’s Caseworker
Background: Moved to Hoveton in 1992 with her husband, Peter. Has one daughter by a previous marriage and three stepsons, plus five grandchildren. Worked with Peter for 12 years running a successful yacht hire business in Hoveton whilst also working as a publications editor at UEA. Alex retired from UEA in 2004 and went to work for Norman Lamb MP at his constituency office in North Walsham until 2012.

Alex is Secretary for the Broadland Youth and Community Centre’s Management Committee and for the Patient Participation Group at Hoveton & Wroxham Medical Centre, and is also Honorary Administrator for the Norfolk and Suffolk Broads Charitable Trust. Alex is an animal lover and she and Peter sponsor a child in Senegal through World Vision. She first joined Hoveton Parish Council in May 2011. Following a short break, she rejoined the Council in December 2016.

What is the best thing about being a Parish Councillor?

“As a retired caseworker it allows me to continue trying to resolve community related problems.”

What do you like most about living in Hoveton?

“As a non-driver I am within walking distance of the shops, the railway station and buses. There are also wonderful independent cafes with glorious views of the river, and the seaside is within 40 minutes by train.”

This website uses cookies to improve your experience while you navigate through the website. Out of these, the cookies that are categorized as necessary are stored on your browser as they are essential for the working of basic functionalities of the website. We also use third-party cookies that help us analyze and understand how you use this website. These cookies will be stored in your browser only with your consent. You also have the option to opt-out of these cookies. But opting out of some of these cookies may affect your browsing experience.
Necessary Always Enabled

Any cookies that may not be particularly necessary for the website to function and is used specifically to collect user personal data via analytics, ads, other embedded contents are termed as non-necessary cookies. It is mandatory to procure user consent prior to running these cookies on your website.